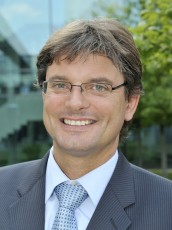 His Ph.D. thesis was on statistical learning, recognition, and pose estimation of 3D objects. Joachim was an assistant professor at the University of Erlangen-Nuremberg (1996/97), a visiting scientist at the Technion (Haifa, Israel), a visiting scholar at the Massachusetts Institute of Technology (Cambridge, MA, USA), and a visiting scholar and lecturer at Stanford University (Stanford, CA, USA) in the academic year 1997/98.

In 1998 he joined Siemens Medical Solutions Inc., where he was working on 3D angiography. In Nov. 2001 Joachim was promoted to director of medical image processing, and in March 2003 director of imaging systems. In parallel to his responsibilities in industry he was a lecturer at the Universities of Erlangen (1998-1999), Eichstaett-Ingolstadt (2000), and Mannheim (2000-2003).

Joachim is the author and coauthor of more than 50 scientific publications including a monography on applied pattern recognition and a book on statistical object recognition.

Besides his education in computer science, in 2003 Joachim also achieved a diploma in Advanced Management (Cross Functional and General Management, Entrepreneurship, Accounting and Controlling) from the Fuqua School of Business (Duke University, NC, USA) and Siemens.

In Oct. 2003 Joachim became Professor of Medical Image Processing at the University of Erlangen-Nuremberg, and since Oct. 2005 he is a chaired professor heading the Chair of Pattern Recognition. His main research topics are currently medical image processing, medical vision, image registration, sensor data fusion, and digital sports.