Please do not call me in the office. Write me an E-Mail instead 🙂

Can you tell which one is fake? 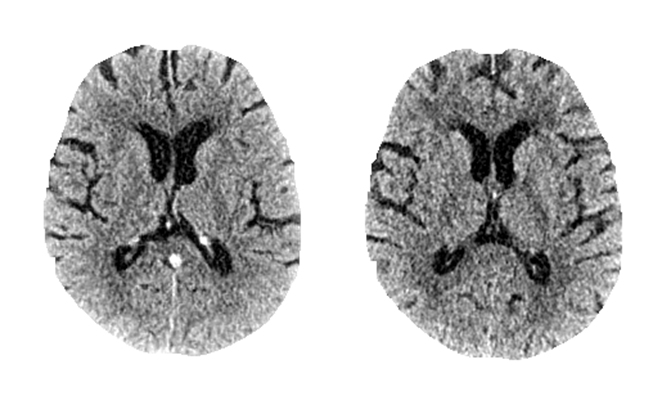 No? Don’t worry*, radiologists neither can 😉 Check out our most recent work “SyNCCT” published at MICCAI to see how we synthesized CT images from angiography scans.

*solution in the SyNCCT tab below

By injecting contrast agent during a CT acquisition, the vascular system can be enhanced. This acquisition type is known as CT Angiography (CTA). However, due to typically lower dose levels of CTA scans compared to non-contrast CT acquisitions (NCCT) and the employed reconstruction designed specifically for vessel reconstruction, soft tissue contrast in the brain parenchyma is usually subpar. Hence, an NCCT scan is preferred for the visualization of such tissue. We propose SyNCCT, an approach which synthesizes NCCT images from the CTA domain by removing enhanced vessel structures and improving soft tissue contrast. Contrary to virtual non-contrast (VNC) images based on dual energy scans, which target the physically accurate removal of iodine rather than generating a realistic NCCT with improved gray/white matter separation, our approach only requires a conventional single-energy acquisition. By design, our method integrates prior domain knowledge and employs residual learning as well as a discriminator to achieve perceptual realism. In our data set of patients with ischemic stroke, the absolute differences in automatic ASPECT scoring, which rates early signs of an occlusion in the anterior circulation on a scale from 0 (most severe) to 10 (no signs), was 0.78 ± 0.75 (median of 1) when comparing our SyNCCT to the real NCCT images. Qualitatively, realistic appearance of the images was confirmed by means of a Turing test with a radiologist, who classified 64% of 64 (32 real, 32 generated) images correctly. Two other physicians classified 65% correctly, on average.

And by the way, the left one was fake 😉 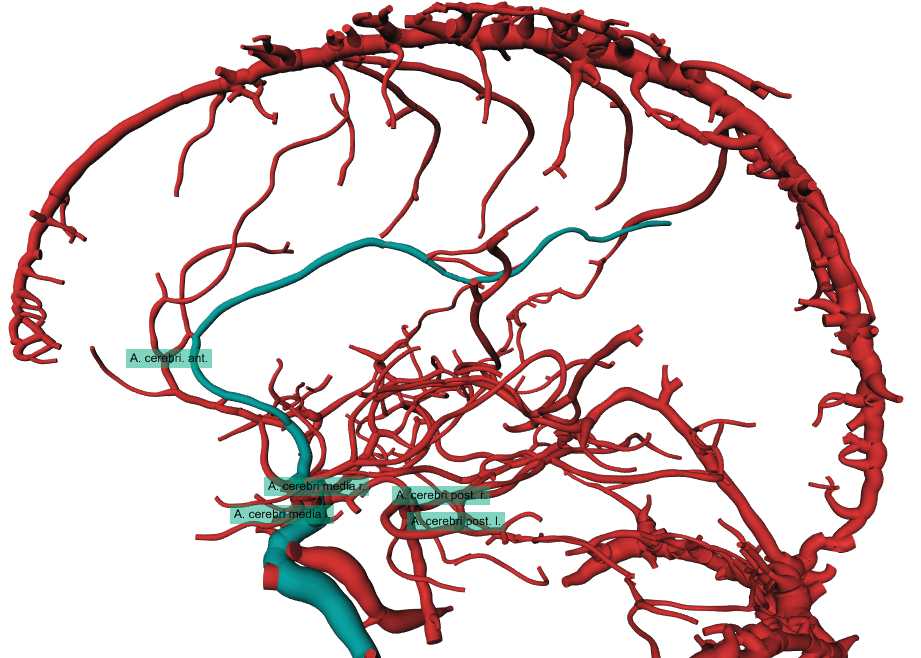 Computed Tomography Angiography (CTA) is one of the most commonly used modalities in the diagnosis of cerebrovascular diseases like ischemic strokes. Usually, the anatomy of interest in ischemic stroke cases is the Circle of Willis and its peripherals, the cerebral arteries, as these vessels are the most prominent candidates for occlusions. The diagnosis of occlusions in these vessels remains challenging, not only because of the large amount of surrounding vessels but also due to the large number of anatomical variants. We propose a fully automated image processing and visualization pipeline, which provides a full segmentation and modelling of the cerebral arterial tree for CTA data. The model itself enables the interactive masking of unimportant vessel structures e.g. veins like the Sinus Sagittalis, and the interactive planning of shortest paths meant to be used to prepare further treatments like a mechanical thrombectomy. Additionally, the algorithm automatically labels the cerebral arteries (Middle Cerebral Artery left and right, Anterior Cerebral Artery, Posterior Cerebral Artery left and right) and detects occlusions or interruptions in these vessels. The proposed pipeline does not require a prior non-contrast CT scan and achieves a comparable segmentation appearance as in a Digital Subtraction Angiography (DSA).

And here is more Material